Though it's a simple portmanteau of the words "developers" and "operations", the term DevOps is often hard to define. And doing so often spurs impassioned debates, not only about the definition, but also about the movement that's shaping the way businesses operate.

"Because there's not a clear definition of what DevOps is, it meant a lot of different things to a lot of different people," says Heather Mickman, senior group manager of the API and integration team at retail giant Target. "That made it difficult to even use that word internally within Target just because of misconceptions or misperceptions around what DevOps was."

But as Heather and a small band of early adopters began to pioneer the process within Target, they began to develop a definition.

"It's about culture first and foremost. It's not about what does an org structure look like or what tools are we using to do our technology work, but it's about the culture of empathy and sharing and learning within a technology organization," she says.

Ross Clanton, senior group manager of Target's infrastructure services team agrees, "We've been really focused on the culture around DevOps and really how that needs to be focused on getting the various functions around IT and our business stakeholders to work together more effectively to get to common outcomes."

But he acknowledges that often the perception is blurry.

"It does bleed a lot into the technology practices," he says, "Whether it's infrastructure as code, continuous integration, continuous delivery, etc. A lot of people end up talking about that stuff. It is all very inter-related but we've been working hard to differentiate that because we need to focus on culture to drive change."

She explains, "Initially, you have some change agents that start showing a different way of doing work, and then secondly that moves into more of a grass roots momentum with a lot of passionate technologists."

The third stage is getting senior leadership to recognize that the change is integral to organizational success, which leads to the fourth stage of scaling the change across the entire organization.

"I think a lot of our story this year is going to be things that we're doing to experiment with how to scale the model out more broadly across our organization," he says.

But scaling out across an enterprise as large as Target is difficult challenge.

"It's one thing to talk about, 'I have pockets of different teams that are working in this fashion,'" says Mickman, "I think it's a harder thing to do that across thousands of people than it is across hundreds."

Despite the challenge, Clanton is optimistic and excited to keep the DevOps change progressing.

He says, "We'll definitely have learnings to share because we're trying out some different things on how we scale the people, the tech, the process, all of it. I know we'll definitely have learnings. We're going to make some mistakes on some of the things we're going to try, but we'll adapt and we should have a good success story to tell on the outcome of all of it."

You can hear more about Target's DevOps transformation at the Velocity Conference in Santa Clara, May 27-29.

To learn more about the 4 phases of DevOps, join Heather and Ross on May 6, as they lead a free webcast to share their insight on the phases and advice from their experiences. 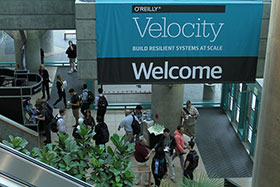