We are pleased to announce that Intel Nervana will join O’Reilly Media to co-present the Artificial Intelligence Conference. The first AI event presented by both companies will be the AI Conference in San Francisco September 18-20, 2017, followed by AI Conferences in New York and San Francisco in 2018.

In this episode of the Data Show, O’Reilly's Ben Lorica speaks with Naveen Rao, VP and GM of the Artificial Intelligence Products Group at Intel about building a next-generation platform for deep learning. 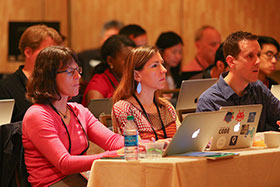